For a long time I’ve realized that there are two words that impact my marriage the most.  Some would say humorously that, for a man, those two words should be “Yes, Dear“.  Others might say they should be “I’m sorry“, though that’s technically three words.

The two words, I am thinking of, are a pair and we use them often.  They have significant impacts on our marriage.  And yet we overlook their power.  The two words are the simple, “Yes” and “No”.

With “Yes”, we enter the relationship of marriage and that is a wonderful moment.  But for many of us YES becomes the default response to every question.  And that can become a real trap.  Let me show you why.

Saying YES, too often, leads to settling for ok, rather than the best.

The YES BUT syndrome.

This is a problem I have often struggled with and I see it a lot in other’s lives.  It is our tendency to say YES, when NO is the best answer.

For me, it would start when I would respond to a request from Lou Ann with a YES, but in my mind I was wanting to say NO.  Inside I wanted to do something else but I also wanted to please her and maybe avoid possible conflict.  But it did not end there.

Eventually I would become frustrated after one or many YES’s. That’s when I exploded expressed frustration or anger with Lou Ann.  Of course, it came out of nowhere so she was blindsided by my emotions.  She would then struggle to understand why I was angry because I had hidden my real feelings from her.

My YES’s were motivated by my desire to 1) People-please/Look good, 2) Avoid conflict.  They were temporary solutions that I chose because I wasn’t being authentic.  And they didn’t bear good fruit in my life.

Over the last several years I have made a lot of progress in being honest about my desires.  I’m willing to add a new word to my vocabulary. That word is “NO”.

“No”, is a wonderful word.  It acknowledges that I have free-will.  It sets boundaries.  It expresses what I feel inside.  It keeps me safe.  It leads to meaningful conversations.

Ever watch a toddler going through the “NO” phase?  Sure, it can be irritating to experience but the positive side is that they are learning to express their viewpoint.  They are beginning to recognize they are an individual and have choices (not exactly but at least they believe they do!)

NO says I am not you and you are not me.  NO allows me to prioritize things.  Since we are finite and only have so much time, NO is critical to our existence.  If we had eternity we could say YES to everything but we don’t.

The Bible talks about YES and NO.   Jesus said YES to certain things and NO to others.  He was usually criticized when he did because others thought he should do something else.  That happens with you and I too.

So I know I have this hangup about the word NO.  NO sounds so negative and uncaring and rejecting.  I feel uncooperative.  I don’t feel like a good team-player.  Plus, I’m putting myself in a position to be questioned.  Saying NO isn’t safe because it can be risky and unpredictable.  That’s probably why It is so tempting to say YES instead, isn’t it?

Of course, you can say “NO” many ways.  Ways that don’t sound harsh or uncaring. Ways that let you express your real feelings to others.

The important thing is for me to say NO, when it must be said.  When I must be honest about my opinion or feelings.
And also to say YES with the same honesty.

Otherwise I’m drifting into becoming a hypocrite, a fraud, a white-liar, or just plain inconsistent.  I begin to fall into the “go along to get along” crowd.

If I am to be honest, transparent and all of the other good things that Jesus is calling me to live out, then I need to learn more in this area. So join me this week.

Be more aware of your YES and NO statements.  Look for dishonesty, avoiding and people-pleasing.  Be transparent.  Be kind.  Be honest with others.

“It is extremely important to be able to make negative assertions. We must be able to say what is ‘not me’ in order to have a ‘me’.
What we like has no meaning unless we know what we don’t like.
Our yes has no meaning if we never say no. ” Dr. Henry Cloud

“Learn to say “no” to the good and the advantageous, in order to receive the best.”   Sunday Adelaja

Here’s a downloadable worksheet my friend, Alan Jones, created.  It is about making adjustments in your Life.  It asks you WHAT DO YOU NEED TO KEEP DOING, STOP DOING, START DOING?  I’ve found it to be helpful in doing a checkup on where I am spending time in my life. Also, check out Alan’s book.
“Revolution of One: It’s Time to Come Alive Again!”  (Click to view more) 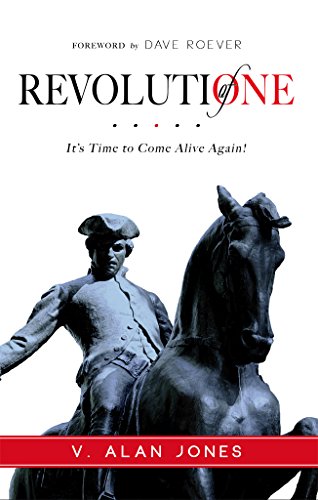 When it comes to life, many of us are dying inside. Those around us may not know it, but we are dead men walking. We’ve lost our passion to pursue our God-given destiny, and the energy to do anything about it. We beat themselves up and feel guilty for not living up to expectations.
Life has seemingly passed us by and if truth be told, we believe ourselves to be failures. When we are dying on the inside something needs to change.